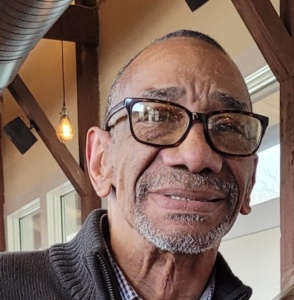 There is no typical day for Allen Johnson, Street Outreach Case Manager at the Bucks County Opportunity Council.  Although his office is in the Lower Bucks site in Bristol, he spends most days traveling up and down the county responding to calls for help.

Allen meets people where they are—in parking lots where they sleep in their cars; near storage units that hold everything they own after an eviction; at the library where they have gone to shelter themselves during extreme weather. After receiving a tip about a young man seen hanging out along the Delaware riverfront for days, Allen heads out for a walk to try and reach out to him.  Then he travels up-county to talk to a homeless couple who are begging outside a convenience store. The woman was reported to be pregnant. Allen is intimately familiar with the homeless encampments that bring the homeless together in sections of the county, and he visits them often.

“Building trusting relationships is the key to helping clients move from homelessness to self-sufficiency,” Allen believes. For some, “the abnormal (way of living) has become normal, and they don’t see a way out. We help them see a future and re-invest in themselves. The goal is to help them find housing as soon as possible, but, in the meantime, they are able to take showers and use laundry facilities at BCOC, and are guided toward other resources.”

“When they are housed,” Allen continued, “they begin to feel safe. One client didn’t care that he was sleeping on the floor in an empty apartment– he was safe. And once a person is safely housed and has food, we can begin the work to help them find jobs and other services that will help them become independent.”

There is no “typical” homeless person. It could be a young person who severed ties with her family and has been couch-surfing, or a senior who lost a spouse and could no longer afford the housing expenses. Some have addiction or mental health issues; others have left abusive relationships quickly, or were evicted because an illness or loss of job meant they could no longer pay the rent. Their family unit has broken down and they have no one to turn to for help.

Allen’s work with the homeless began 13 years ago, when he arrived in Bucks County from Delaware County with three shirts and two pairs of pants to his name. He was living in a recovery house, and began visiting people living in homeless encampments in Lower Bucks County. As he got more and more involved, Allen met others who were working on the issue, and eventually found himself at a county meeting where officials were discussing the results of the first “Point in Time” count of homeless people in Bucks County.

It was January 2009, and the county declared the number of homeless to be 12. From his own experiences at the time, Allen knew that the count was off. He took pictures of the encampments and how the people were living, and showed up at the next meeting to distribute photos. “I wanted them to see the faces, not just discuss numbers,” Allen recalled.

Since that first meeting, he and others in the community have worked together supporting the needs of the homeless. Allen’s passion eventually led to jobs as he worked to call attention to the housing crisis. Five years ago, he was hired by BCOC and began working as a Street Outreach Case Manager. “I am blessed and humbled to be working in this field,” Allen said. “I understand where people are coming from, and I meet them where they are.”

“Where they are” can mean many things, and the first step can be helping a person get an ID or Social Security number –necessary paperwork to begin to apply for other resources, such as SNAP.  At the onset of COVID, nothing was simple, as many government offices were closed until new hours and procedures could be put in place. The sheer numbers of those needing help, many for the first time in their lives, meant Allen and others at BCOC faced heavy caseloads that required them to find creative solutions to solve new challenges.

Currently, the homeless count in Bucks County is approximately 283, but that number changes all the time. For example, when a “hundred-year flood” deluged parts of Lower Bucks this past July and displaced 100+ families, BCOC stepped in to help; in September, BCOC was called on again when areas of Central and Upper Bucks were damaged by Hurricane Ida and several families needed to find safe, temporary housing while they waited for long-term help from FEMA. Then in November, the Bush House Hotel in Quakertown was condemned, leaving 60 residents displaced with very little notice.

In emergencies such as these, some people can count on family and friends for support, or have funds or credit cards to pay for a hotel, but others with no family support system or who are already living paycheck-to-paycheck need help.

During COVID, Allen began to work with Michael, who at age 70 was living in a garage until his girlfriend kicked him out. She had been handling his finances, and it took working with the Office on Aging and Social Security to get him the IDs and banking paperwork he needed to regain control of his finances. Michael is waiting for senior housing to become available, but is safely housed in the meantime and working at McDonalds to supplement his income.

Help for the homeless or those in imminent risk of becoming homeless begins with a phone call to the Bucks County Housing Link helpline, 800-810-4434, the county’s centralized response system. After a brief, initial intake, follow-up is assigned to either BCOC’s Street Outreach Staff or one of the other organizations in the network.

Last year, BCOC staff helped 106 previously homeless people find safe housing, and supported an additional 2,658 people to avoid evictions. Assistance to prevent utility shutoff was provided to 486 people.  The goal is to assist clients before they are evicted, because once evicted families face a downward spiral that creates escalating challenges—they are moved out of familiar surroundings, children face the possibility of having to change schools and leave their friends, and many lose most or all of their belongings as they travel.

Over the years, Allen has seen many changes in how the county responds to the homeless in Bucks County. Organizations with common goals are in constant communication and work together to reduce homelessness and share resources. For example, last year BCOC joined forces with the United Way of Bucks County and St. Mary Medical Center, and, with financial support from Penn Community Bank, opened the HELP (Healthy Eating and Living Partnership) Center.

This 8,000 square foot warehouse, staffed almost completely by volunteers, has become the central hub for food collection, storage and distribution to partner food pantries, senior centers and schools throughout the county. Another section of the HELP Center contains home goods and consumables that are available to clients in need who are working with agency partners to find resources.

“This is a job that is never going to be done; let’s get real,” Allen states. “The challenges are so complex, with many movable parts… funding changes, emergencies occur, and people need help.” Allen is ready to help, and many of his former clients who are safely housed and working are grateful to him and stay in touch. They call or send holiday cards with updates on their lives. “He is my brother from another mother” a former client warmly recalls.

From Volunteers to Joining #TeamBCOC